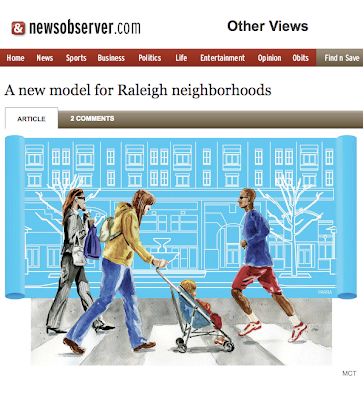 The UDO Consolidated Draft is HERE

The UDO Consolidated Draft is now available at:
http://1.usa.gov/eAoSWA

Let the conversations begin at http://bit.ly/eAzZQx.

How to use RaleighUDO.com to review and comment on the Draft:

If you have not created an account yet, just go to http://RaleighUDO.com and click "Create new account" in the "User Login" block in the left sidebar. When I approve your account, I will assign you the role of blogger, which will give you access to a "Blogger Menu" in the left sidebar. To get started, click on the "Help" link to get instructions for creating, revising and deleting a blog. If additional help is required, let me know and I will update the help page.

The objective is to get each blogger to dedicate some time educating  and critiquing a specific regulation for the public...hopefully, something that is of significant interest to the blogger. Once you have decided what you want to blog about, please let me know. This process can be most successful if we blog about many different regulations.

When you visit the website, you will see lists for the major sections of the UDO and a list of hot topics. I expect the list of hot topics to expand as the review begins. When you identify a new hot topic, send it to me so I can add it to the list.

Posted by Community SCALE at 1:08 PM

A dedicated resource has been developed for review of the UDO. Please help spread the word.

The schedule has only allocated two months for the public's review of the initial draft of the UDO.
Read more at …

Get involved with UDO -- what we decide this spring will shape Raleigh's future.
Posted by Community SCALE at 6:42 PM

THIS JUST IN -- from the City of Raleigh Planning Department

Three meeting times to choose from—
SAME MEETING, DIFFERENT TIMES FOR YOUR CONVENIENCE

In addition to the three sessions offered by the Department of City Planning, the Triangle Community Coalition will sponsor a Unified Development Ordinance discussion and workshop that will immediately follow the Luncheon Learn Program. The event will be held April 21, 2011 at the Urban Design Center, 133 Fayetteville Street, Suite 100, Raleigh, NC. You must register in advance for the Triangle Community Coalition luncheon.

ATTEND one of the three upcoming open house sessions for the Public Review Draft of the Unified Development Ordinance.

HEAR a presentation on the Public Review Draft of the Unified Development Ordinance.

LEARN . . . about how the Unified Development Ordinance will provide the framework for implementing the 2030 Comprehensive Plan.

Learn how the Unified Development Ordinance will help to create a city of lasting value.

Learn how the new development regulations will address market trends, incorporate best practices and address contextual issues throughout the City.

ASK questions of the consultants.

Hosted by the City of Raleigh, for more information contact Christine Darges at 919-516-2634 or christine.darges@raleighnc.gov