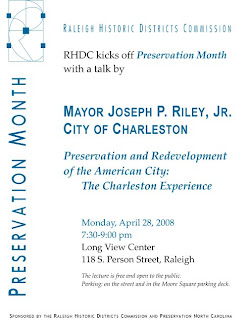 Charleston is recognized as one of the most livable and progressive cities in the United States. Mayor Joseph P. Riley, Jr., will share his insight into the role of public leadership in historic preservation and community development.

Mayor Riley is widely recognized as one of the most visionary and highly effective governmental leaders in America. He is serving an unprecedented eighth term as mayor of Charleston. Under his leadership, Charleston has increased its commitment to racial harmony and progress, achieved a substantial decrease in crime, experienced a remarkable revitalization of its historic downtown business district, and seen the creation and growth of Spoleto Festival U.S. A., built Waterfront Park, developed nationally-acclaimed affordable housing, and experienced unprecedented growth. Mayor Riley has led a city government with an impressive record of innovation in public safety, housing, arts and culture, children’s issues, the creation of park and other public spaces, and economic revitalization and development.

The Raleigh Planning Department, knee-deep into writing a new comprehensive plan, is open to our biggest, baddest, baldest ideas for fashioning a great 21st century city. So they say. Dust ‘em off, shine ‘em up, and bring them to Tir Na Nog on Monday, April 21. More below, from Kris Larsen —

July of 2008 marks the 220th anniversary of the first ‘planning’ meeting held for Raleigh. That meeting, held at Sir Isaac Hunter’s Tavern, established Raleigh as the new state capital of North Carolina. In honor of this occasion, the Department of City Planning will be hosting a spirited, non-traditional planning charrette to discuss the Big Ideas you have for downtown and the City of Raleigh. This email, and the attached PDF, is a call for our community’s dreamers, thinkers, and critics, imagineers, and designers to come together to share your ideas, no matter how crazy or far-fetched, for what our community can be.

You want a river downtown? T ell us.
An arena surrounded by walkable retail? Tell us.
A zip line between the Two Hannover Tower and Wachovia Capital Center? Tell us.

You get the point.

Please feel free to post the attached PDF on your respective websites, as the success of the event will be influenced by the number of dreamers we have in attendance.

Posted by Community SCALE at 1:54 PM